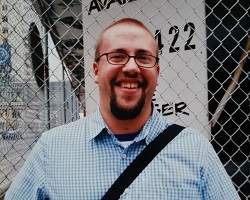 Vincent C. Toensing, husband, father, son, brother, and friend died unexpectedly on Memorial Day, 2016. He was only 38. Vince was diagnosed at 17 with lupus and managed it for 20 years until his untimely passing.

On early Monday morning, May 30th, 2016, Vince was found unresponsive at home. As EMT arrived he became alert, albeit disorientated, and walked to the ambulance with their assistance. At the time it was thought he would be okay. My wife Aubrey, his sister, thought she would have another long day hanging out with Vince in another ED and ICU and this chapter would come to an end with his eventual and successful discharge. Nobody could have predicted the events that were to come.

En route to the hospital ED Vince coded without warning, was resuscitated, and EMT realized they had a much more serious situation. They urgently continued and as they were arriving he coded again. This time he did not recover.

While this was happening Aubrey and his wife, Christina, were making arrangements for kids to be watched and were heading to the hospital. On arrival they were both met with devastating news. Vincent C. Toensing was dead. A coroner’s report would later state his death was a result of lupus-induced vasculitis.

In his passing he left behind three wonderful, beautiful children (5 year old twins and 9 year old son) and his beloved wife, Christina. As well his sister, Aubrey, his parents, Chris and Laurie, and many other friends and family members that so dearly loved him.

In honor of Vince, Aubrey and Keith Rahn are taking on this disease and the fight in order to improve the quality of life for people impacted by lupus. We are attempting to do all that is possible to make sure other families do not have to go through the devastation and horror, the grief and hurt that we are dealing with since that fateful day. The devastation his death and this disease has created is overwhelming at times. Almost two years has past and everyone who knew Vince is still dealing with his untimely death in some manner. It’s strange how grief and mourning can come and go; sometimes within the same day, same minute, in the same thought even.

How We Are Raising Awareness and Money

We can not think of a better way to utilze our talents in order to raise awareness and funds then by cycling across the United States. What better way than ultra-cycling to raise awareness and funds for lupus research. The Trans-America Bike Race is a 4,300 mile solo and self-supported race across the United States, spanning 10 states. On June 2nd, 2018, Keith will be on the start line in Astoria, Oregon - pedal over the Rockies, through the plains, up and over the Appalachians and finish in Yorktown, Virginia.

Lupus had inhibited Vince from doing quite a few things in his life; this is for him. This is for his children; to show them we can do anything in this life. This is for every family member who is living with the grief of losing a loved one to this disease. And this if for those who have and our managing lupus. Don’t ever give up!

GIVE FOR A LIFE FREE OF LUPUS

Your tax-deductible gift is critically needed to support the Foundation’s programs in life-enhancing research, education, support and advocacy. Donate today. Thank you very much; we are grateful for your gift, support and following our journey!