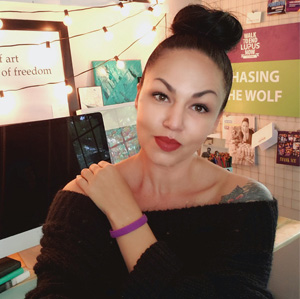 For those we have lost.

For those who are currently Fighting.

For those who have not yet been diagnosed.

A STORY OF RELUCTANT REALITY

It has been difficult for me to tell my story... because I was raised to be strong, assertive, and unflappable - and my bout with Lupus frequently leaves me feeling anything but. Still, I believe that those very traits are driving me now to raise money to help defeat this awful debilitating disease.

I take a cocktail of a dozen pills and injections that range from Immunosuppressants, to Pain Management; in addition to oral Chemo that I take every Friday evening to manage my flares which consist of organ inflammation, fatigue, cognitive dysfunction, body/hand tremors, lung infections, and chronic nausea (no doubt a byproduct of the multiple medications). A Lupus flare is an increase in disease activity in one or more organ systems sometimes creating new symptoms while exacerbating the current symptoms.

During the years leading up to my diagnosis, I was a constant fixture at the gym and very active outdoors. I took great care of myself - you'd think this disease would strike people who don't... but Lupus doesn't discriminate. In the beginning I kept randomly getting sick. I was in and out of the hospital; doctors tried their best to put their finger on what was wrong but Autoimmune Diseases are extremely elusive. Sometimes doctors gave up and I would have to start over with new ones. I knew things were not right with me, my body felt different; but this disease can be so hard to diagnose and can affect so many parts of the body. The tremors began shortly after several hospital visits. There's a different kind of uneasiness that creeps in when you realize you're not in control over what your body is doing. My fatigue, brain fog and tremors were sporadic, so the doctors couldn't come to a definitive diagnosis. All told, it was nearly 5 years of new flares, testing, procedures, hospital stays, and multiple misdiagnoses including Non Hodgkin’s Lymphoma and Relapsing-Remitting MS. After approximately 18 months of believing that I had MS, I was finally informed that what I'd been wrestling with was, without a doubt, SLE Lupus, backed with three additional autoimmune diseases, Raynaud’s Syndrome, Pernicious Anemia and Fibro.

For a time, that diagnosis brought a little comfort, because at least now we knew what we were fighting. Today, though, I realize that giving it a name isn't nearly enough. I am constantly dealing with new symptoms. In the past two years I have fought multiple bouts of extremely painful pleurisy, which is causing inflammation in membranes that surround my lungs and line my chest cavity. Making it nearly impossible to do the one thing I really love; scuba. In addition to constant bouts of pleurisy I also suffer from chronic pericarditis. This occurs when the pericardium—the thin membrane surrounding your heart, becomes swollen and irritated, causing it to leak fluid around the heart. As a result, I am continuing Immunosuppression Therapy - the goal of which is to lower my immune system so much that it stops attacking my organs. This does, in turn, make me extremely susceptible to illness and in a constant state of physical and mental discomfort.

I am not alone in this, my story is shared by 1.5 million sufferers in the United States, and over 5 million worldwide - and in fact, it's worse for many of them than it is for me. I look back now on my early time with Lupus and wish we had known then what we do now - and know that greater funding for research today can help prevent others from having these same feelings 10 years from now.

Now, perhaps this is where the strong, assertive, and unflappable part of me comes back in. Giving up is not something I was ever taught to do. I haven't been extremely public with my struggles in the past - thinking that a strong face was the best solution. I now think, though, that sharing these struggles is actually the more potent action - because I can't beat this disease without the help of so many others. I will help find a cure, or I will die trying - but I will be silent no longer.

This walk means more than the dollars that will be raised. It means we will be taking steps closer to a cure. It means we will be a part of something that can change millions of lives. It means that someone may be able to spend a day without pain and someone may be able to avoid Immunosuppression, Chemo and Organ Failure. I am walking so that others may be able to live their lives, in ways that I  haven't always been able. I ask that you support me in this - not for me, but for all the Lupus Warriors who do not even know the battle that lies ahead of them.

THANK YOU TO OUR GENEROUS CORPORATE SPONSORS