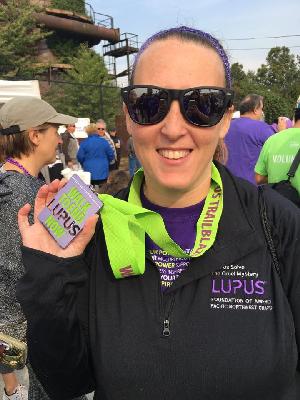 In 2009 my husband ran his first Rock N Roll marathon.  I was so proud of him, but I looked at the medal he earned with a little jealousy.  Jealousy of knowing my body would probably never be in good enough shape to earn one of those.  My body would fight against me to achieve such an amazing physical feat.  Fast forward to Feburary of 2017, I was told by my rhuematlogist that I had run out of medications to try to combat my Lupus symptoms.  Now it was just a waiting period to see if I was a candidate for a trial medication or even worse, waiting for a new med to be approved.  FYI- I am rarely a candidate for a clinical trial because I REFUSE steriods and since most Lupus patients are on steriods pharmas want thier candidates to be like the majority.

A switch flipped for me that Feburary.  If I was not going to be on meds I was going to get my body back in shape.  Be active, lose weight.  I started walking and by September I had given a shot at jogging.  In November of 2017 I ran my first 5k and earned my FIRST medal!!  From that moment one I was hooked.  I had a goal in 2018 to run a 5k a month.  Little did I know I would blow that goal out of the water.

In 2018 I ran in 20 races... 77 miles and I climbed the Space Needle (832 stairs)!  Those 21 races included 15 5k's, 2 obstacle courses, 1 8k, 1 10k and my first 1/2 marathon.  I was thankful I had signed up for the Rock N Roll BEFORE running that 1/2, because I am not so sure I would have signed up for it if I had.  I failed to train for the 1/2 in August thanks to my Lupus raring it's head for over a month.  But I completed the 1/2 and spent the next 4 days reminding myself how to walk.  So why have I signed up for another one?  Well, first my friend and race partner has her own personal goal with this race.  And second, because I know that I can train for it and succeed.  I know my body may hate me after, but I am ready to push past it and complete this goal.  And I want my miles to count for something.  So please help me reach my goal and donate today.

I am Racing to End lupus!

Join me and support the mission of the Lupus Foundation of America! My goal is to raise critical funds for the estimated 1.5 million people living with lupus in the United States. Your donation will help me reach my personal fundraising goal and support the Foundation's efforts to improve the quality of life for all people affected by lupus!